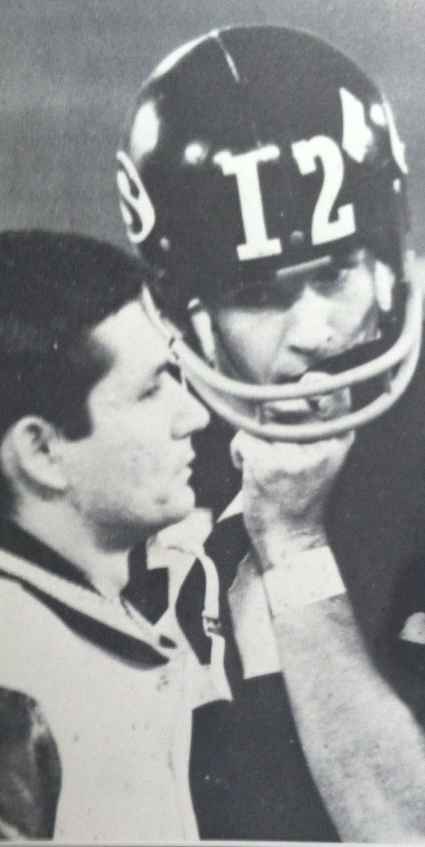 Servite mourns the loss of George Dena who passed away Sunday, September 22, 2013 at the age of 75.

George Dena served as Head Football Coach from 1961-1971 and is recognized as the creator of the Hut Drill. Started in 1961, the Servite football team begins and ends every game with the Hut Drill. The purpose of the drill is to emphasize discipline, precision, teamwork and character before and after the game, whether the team wins or loses.

Dena was part of the original coaching staff in 1958 and served as offensive coordinator for the 1960 football team that won a CIF Small School Championship. He became the co-head coach for the 1961 season with Frank Dorretti before being named head coach in 1963. Dena left Servite after the 1971 season with a career record of 75 – 36 – 5. In 1992, he returned to Servite for two seasons as the Offensive Coordinator, coaching current Head Football Coach, A. J. Gass ‘93.

“Now that I am a coach myself, I am able to appreciate my former coaches, recognizing the care they felt for me and my teammates. Coach Dena showed me what it means to be a leader and a true man of Servite; lessons I strive to teach our young men daily. His memory will live on as the tradition of the Hut Drill is carried out during every football game,” said Coach Gass.

Despite many variations of the Hut Drill being executed throughout Servite’s history, the drill was returned to its original form to begin the 2013 season in honor of George Dena and the legacy he left at Servite.

Dena graduated from Anaheim High School in 1956, an All-Sunset League quarterback. After playing at Santa Ana College and coaching at Servite, he returned to his alma mater as the Offensive Coordinator. Throughout his 42-year career, he also coached at Foothill and Brea-Olinda High Schools, seeing his teams to 29 CIF-Southern Section playoff appearances.

Dena is survived by his wife Eileen, sons Ron, Dan and Ken, daughters Darcie and Kelly and brother Jim.