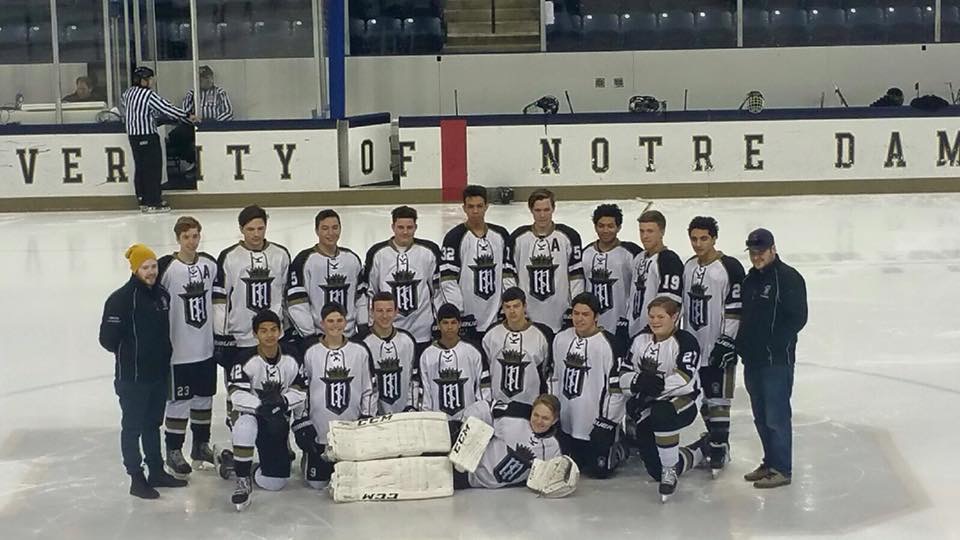 The team made its way to South Bend via Chicago. During the trip, the team was met with an unfortunate situation that tested them beyond hockey. Alex Reyes' father who was traveling with him suffered a health issue while in the air. Luckily, another teammate and his father were there to help Alex with the situation. Alex's father was rushed to the hospital where he is still and in a coma. Each team member found out about this as we traveled to Notre Dame. The families, players, and coaches all set in place action plans to support Alex, his dad, and work on getting his mom out to Chicago.

With a lot on their minds and heavy hearts, the boys played their first game against a strong team from Ohio. The boys played outstanding. Without anyone fully comprehending what was going on with Dr. Reyes, the boys all met at the Grotto on the Notre Dame campus to rally around their brother and support him in the one way they all knew how. Despite 10 degree temperatures, the boys surrounded their brother with prayers. It was amazing to see and put things into real perspective. It was a true testament of the character of the team. The boys then met to have pizza and relax.

Saturday was a packed day. The boys played well in the morning against a team from Virginia. From there, they met up at the Notre Dame Dining Hall with the Notre Dame Club hockey team. The two teams have a connection that started last year. The college players are mentors that keep in touch with the boys and helped answer questions about college curriculum and balancing sports and school. The two teams supported each other at their different games over the weekend. The boys left the dining hall and took a tour of the athletic facilities finished with lockerroom and field access of the football stadium. The boys enjoyed slapping the play like a championship sign and running around in the snow on the field. The sun even poked out and shined on us on the field, for what seemed like the only time the sun came out the whole weekend!

That night, inspired by each other, the boys won! Not only did they win, but you could tell from the start that they were changed. They were having fun as a team.

We finished the tournament against a Canadian team on the Notre Dame home ice rink. It was a hard fought game.

Overall, the experience of the trip and the experiences off the ice captured an amazing weekend! The boys grew together and were faced with real-world scenarios that were far greater than the sport. They had to put their brotherhood and their faith on display. It was a true testament to the school and their formation.