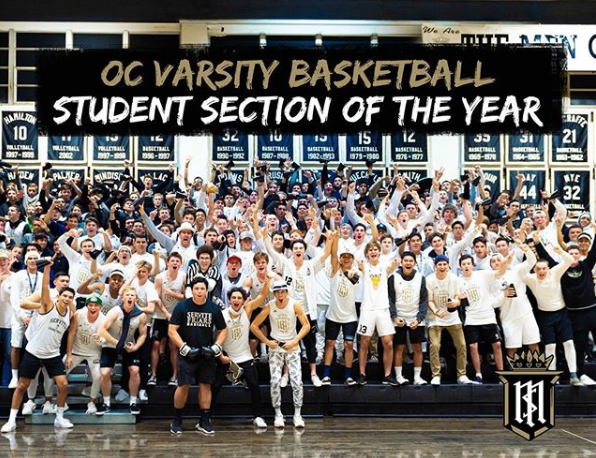 It has been a fantastic year for the basketball student sections in Orange County.

The loud chants and cheers, the savage chants toward the opponents, the props, masks, signs and sideline shows – they were a blast this winter.

Also, I have a closet full of new student section shirts and I thank the many student sections that presented me with great gifts. But I have to remind everyone: Brownie points don't count, but thanks again.

We hope all of the sections learned this year that social media is their biggest tool for making sure they don't get overlooked. Many student sections went to work, especially this week as they made their final case for being included in the OCVarsity Basketball Student Section Rankings for 2019 – and it worked.

Let's see how everyone finished this year — and we'll start by naming the OCVarsity Basketball Student Section Champions . . .

This student section dynasty has done it again!

The Asylum went way over the top this season. They lassoed a horse, they parted the sea, they had a roller coaster, they won a boxing match by way of knockout and they had the mascot from the Anaheim Ducks show up!

All that while going nuts for their Friars.

You sometimes forget that there is a game in progress when The Asylum puts on a show in the stands. This student section can bring the noise like any other student section, but the shows they put on are second to none.

"The best student section boils down to three things," The Asylum said in a statement. "Insanity, uniqueness, and love and not the student body size or record. The Asylum fulfills all of these better than anyone else. We embrace being an all-boys school and truly keep the Asylum full of only guys. Every team that encountered the Asylum this year walked away knowing that we weren't afraid to bring the most intensity and rowdiness. This year especially, we continued to use that Servite education to produce skits and ideas. Literally no other student section has come close to our creativity. Lastly, Servite created the Asylum for the sole purpose of supporting and loving our brothers. We do all of this to help our brothers on the basketball court, soccer field, or wherever it may be."

There is a reason The Asylum turned it up a notch. They know the numbers are against them and their basketball squad is in a very tough Trinity League, but they still managed to go far and beyond for their brothers and that is why the 2019 OCVarsity Basketball Student Section Champion is the Servite Asylum.

"As always, we want to thank everyone who has supported the Asylum," The Asylum said. "Especially the Servite community, alumni, administration, and students. Also a quick shoutout to Ms. Carlson and Mr. Martin who have been a tremendous help this year. Finally, thank you Mr. Alvarez for covering Southern California student sections and always recognizing the Asylum. Credo."

No, thank you Asylum. Credo.