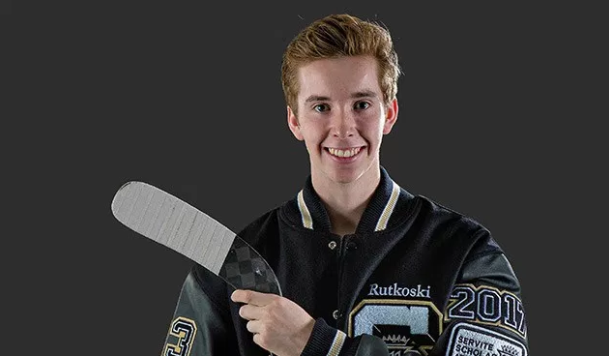 When he was younger, Nic Rutkoski spent many nights at Honda Center with his father watching the Anaheim Ducks play. It wasn't long before the Newport Beach native wanted to get out on the ice himself.

"After watching a couple of the games, I told my dad that I wanted to start playing," says Rutkoski. "So he put me in a couple of 'Learn to Skate' programs."

Rutkoski began his skating training as a figure skater, and after he got his balance, transferred over to hockey skating. The Servite High School senior has now spent five years competing for the Friars on the ice (getting his start as an 8th grader), representing the school's varsity team in the Anaheim Ducks High School Hockey League (ADHSHL).

The defenseman also serves as captain for the Friars. Having served last season as alternate captain, the only non-senior in the role, Servite hockey director, Mike Marshall, knows that Rutkoski brings something special to the team.

"What I respect and appreciate most about Nic is how much he cares for his school and his team," says Marshall "He plays the game with passion and skill, but as much as his top notch skill has helped us through the years, it's his humble way of leading that will leave a lasting impact on the program and all involved. He has stepped into the captain role this year with grace and humility, and is truly a person for others."

In addition to skating with the Friars, Rutkoski also plays for a club hockey team, but finds a unique experience in representing his school on the ice.

As captain, Rutkoski acknowledges that one of the toughest parts about being a leader is to keeping the mood positive when the team is behind.

"I would say one of the most common challenges has been when we are down in a game," says Rutkoski. "One of the challenges we've tried to overcome as a team is to stay positive and keep working."

The 18-year old hopes to continue his hockey career in college alongside studying engineering. He's grateful for his parents who are important role models, helping to guide him through each step. And thanks to a visit to the University of Notre Dame last season with his team, Rutkoski realizes the impact faith plays on being the best teammate possible.

"Hockey has taught me how to be a more patient person, a team player and overall, just a better person...on and off the ice," says Rutkoski. "You can't be an individual in hockey. You have to be a team player. The team has to be strong together."